Hello, Mushroomallow here! Our second game, Kohana, has finally been released after one month of development. We hope this postmortem will be useful for others and aspiring devs in the development of their own product. Long text ahead so take your time, and we wish you best of luck with your journey.

Kohana was made as a part of the Spooktober VN Jam 2021 event and it tells a story about a confection store that exists in the world where both humans and youkai coexist together.

Before going with the idea of youkai and confectionery, Nami and team leader actually spent quite some time exploring other ideas, from mystery to horror, but since those genres were not Nami’s strong point, we ended up making drama added with tragedy because we wanted to try our hands on darker theme this time.

In the making of Kohana, our writer, Nami, took inspiration from some manga like Watashitachi wa Douka Shiteiru by Natsumi Ando and of course, a couple of Takahashi Rumiko’s works like Rinne and Inuyasha.

“Kohana” itself means “little flower” in Japanese. For us, Kohana is not only the name of the store, but also about the character in the story who tried their best to be recognized and accepted by others and how it ended up destroying their own self by not acknowledging themselves first.

Kohana was a big challenge for Nami. Not only because at the time of the jam, Nami was busy with her job and real life matters, but also because writing tragedy was a bit of uncharted territory for her. Before the concept of Kohana was made, Nami actually made two other concepts but unfortunately, none felt right, and due to the approaching deadline, the team leader decided to write down the outline of the story, in which Nami wrote the actual script by following those outlines.

From the start, our target was to fully finish the visual novel in a month (no development extension like our previous game, EDDA Cafe) and it should be strictly under ten thousand words, which we managed to fulfill with word count of the game falling around 9000+ words, even with two story branches. However, we got several feedback about how the story could be fleshed out more and it led to a discussion with the team about making an extended version of Kohana. Unfortunately, Nami is not available in the coming months, so the plan is scrapped and we decided that development of Kohana ends here.

Clover Zero is once again our internal editor. The editing of the script is more or less similar to EDDA Cafe; the usual proofreading work (checking for and fixing grammar mistakes and typos), translation of some sentences from Indonesian to English, and changing some sentences so they flow more smoothly. It was quite the hard work, especially since we’re very pressed for time towards the end.

Nami provided us with some visual references, in which one of them is this beautiful piece by Tsuchiya Koitsu titled “Evening at Ushigome”. We know right away that this is the foundation for Kohana’s visuals. We fell in love with the texture and the strokes of black ink. From that, the visual of Kohana was born.

When designing the character, wikipedia of youkai proved to be very helpful as a good source of reference. Designing Kohana’s guardian, Komainu, was the hardest because he’s a dog but also a lion. Aside from using the statue of (real) komainu as reference, we ended up combining elements from pitbull and panther for him, and kept the spirals on his mane because it seems to be the common element in the statue of komainu. 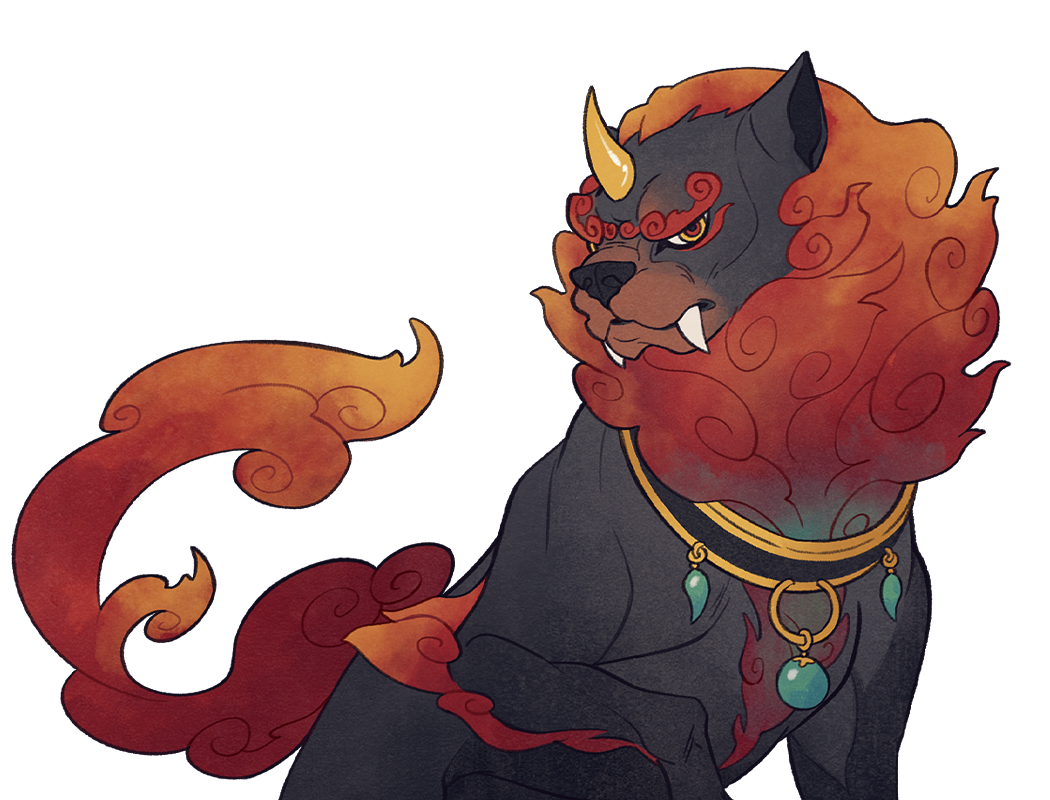 The hanyo (half human-half youkai) character, Iroha, shows up with a mask covering her face in some scenes. Iroha is a kitsune or fox youkai, specifically, a yako or bad fox. There are many references for good-fox (or zenko) masks, but we only found one that depicts yako which is used in noh (classic Japanese performance) and shows more human features than fox features in its design. 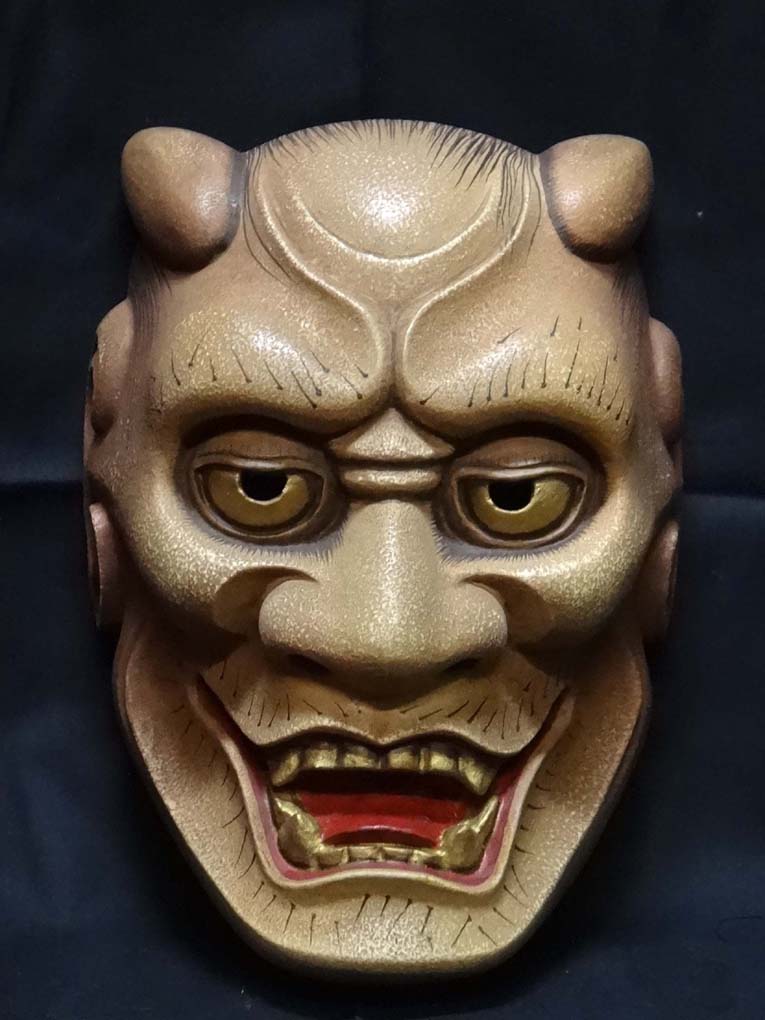 Iroha’s mask is a combination of yako mask and zenko mask, which she used to cover up the human part in herself.

Mad Scientist works again as a UI designer and programmer for Kohana. Unlike our previous work, EDDA Cafe, which is relatively calm, Kohana’s script contains fight and action scenes which is rather tricky to animate on Ren’Py. But through countless trial and errors, we have successfully implemented several animations, the most notable one is the rain and fire animations. The rain animation is just a simple ATL command with repeat, while the fire animation is actually the modified SnowBlossom animation that is available on Historic Ren’Py Cookbook (yes! It still works with the latest version). You can learn how this works on this documentation. Aside from those two, there are several effects taken from Historic Ren’Py cookbooks that worth mentioned: 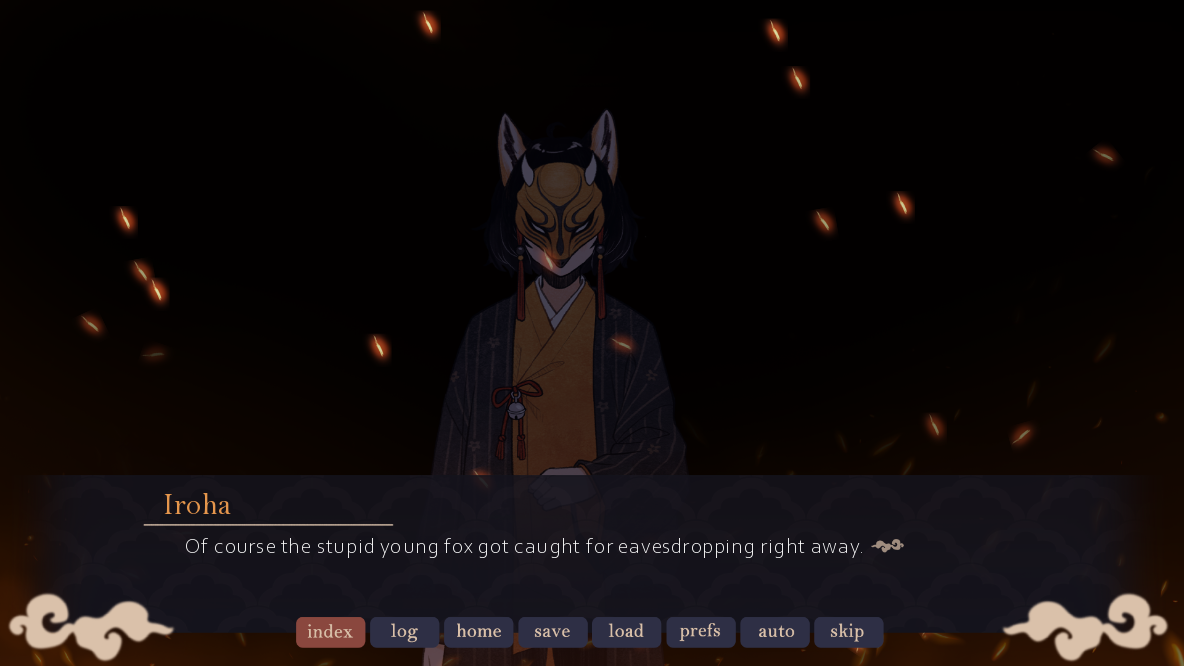 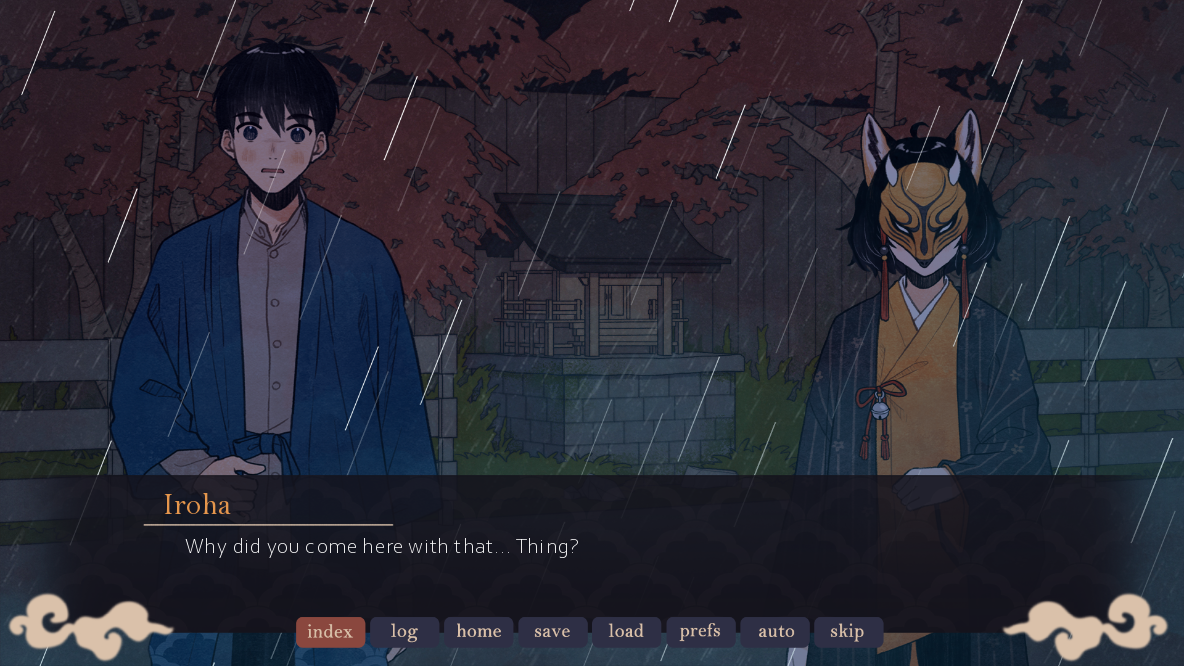 Kohana sprites also have three versions: normal/default version, dusk/orange-ish and dark/night version. To achieve this, we apply some nice tricks taken from Two and Half Studios to match the sprites with the surroundings. Mad Scientist actually have applied this trick on Alex’s sprites from EDDA Cafe with im.matrix.desaturate too, but this example is more pronounced. 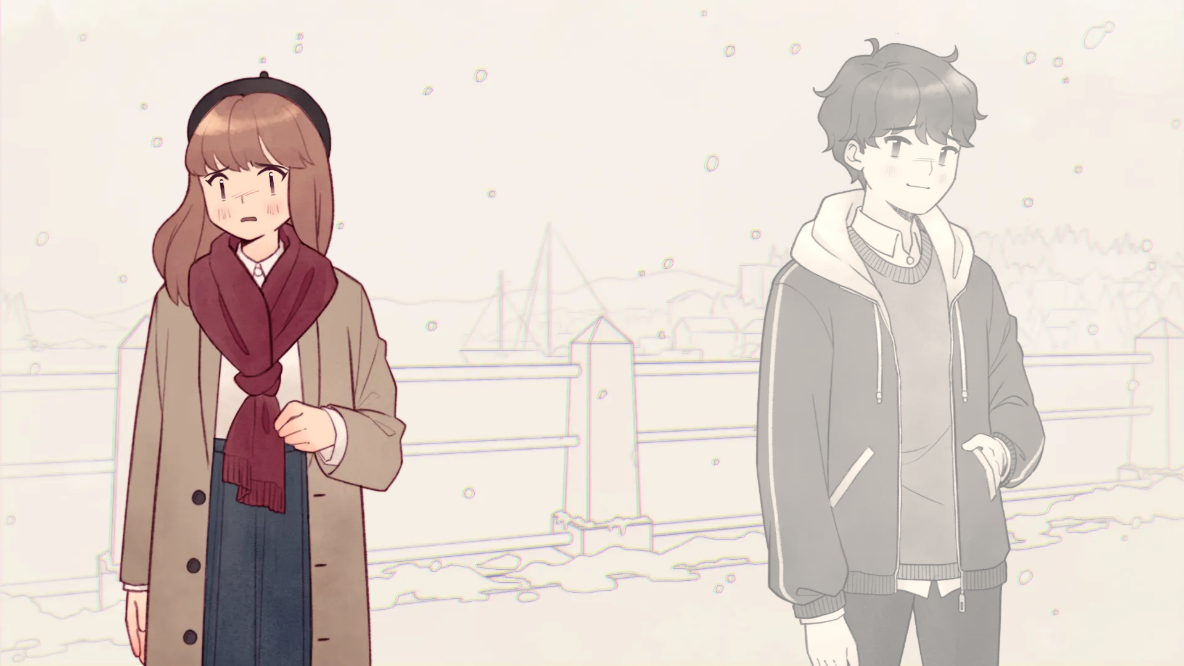 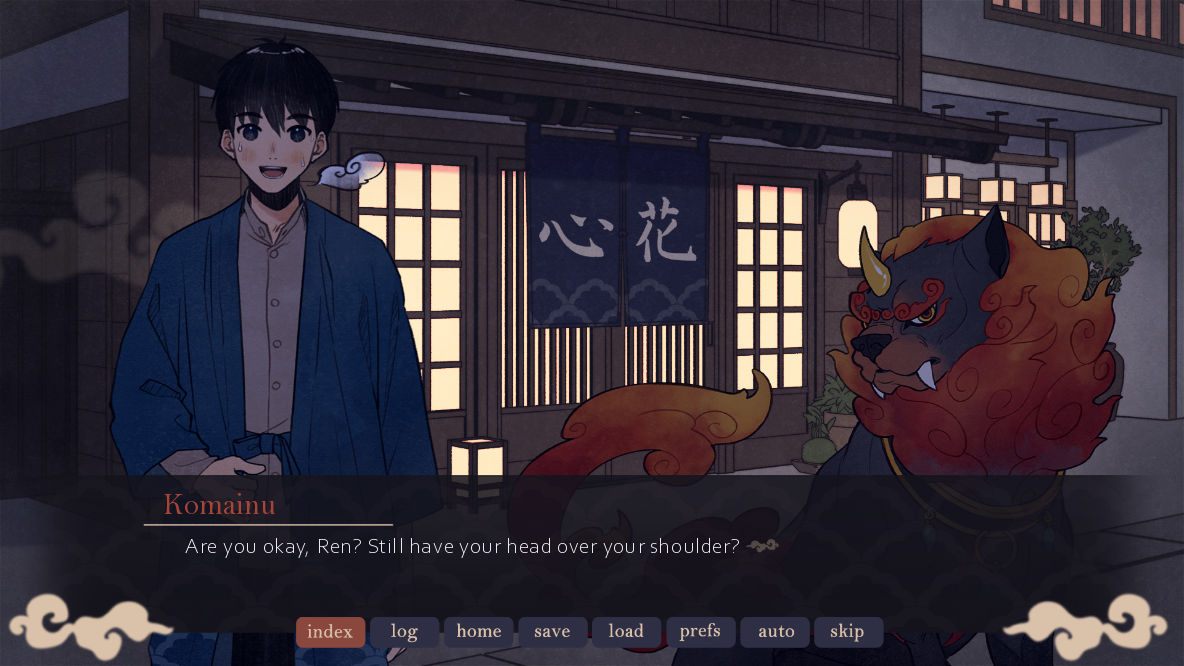 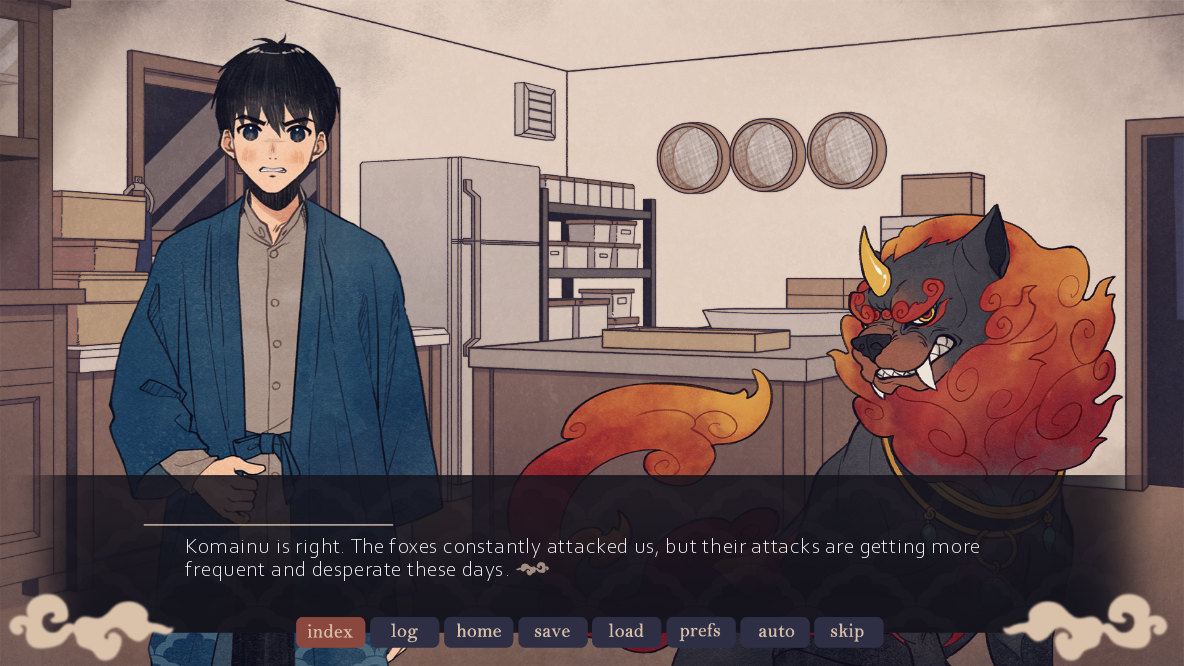 As for the UI itself, the design of the textbox is provided by the team leader, and then Mad Scientist started to work on another screens based on that. Most of the screens are pretty standard: textbox, quick menu, preferences, save/load, history, yes/no prompt which she didn’t really have a trouble to code, but creating a glossary screen is a challenge because it’s not readily available as a default feature and it requires some understanding of screen language. Glossary screen is almost mandatory because Kohana contains a lot of terminology of Japanese folklore that is unfamiliar to most readers. Thankfully we found a Ren’Py All-In-One GUI Template by Tofurocks that contains a code of glossary screens that we needed! What a lifesaver. The code is straightforward and easy to modify even for a beginner, so we strongly suggest you check it out. We only did slight modification with imagebutton instead of textbutton as it shown in the example, but it works flawlessly. 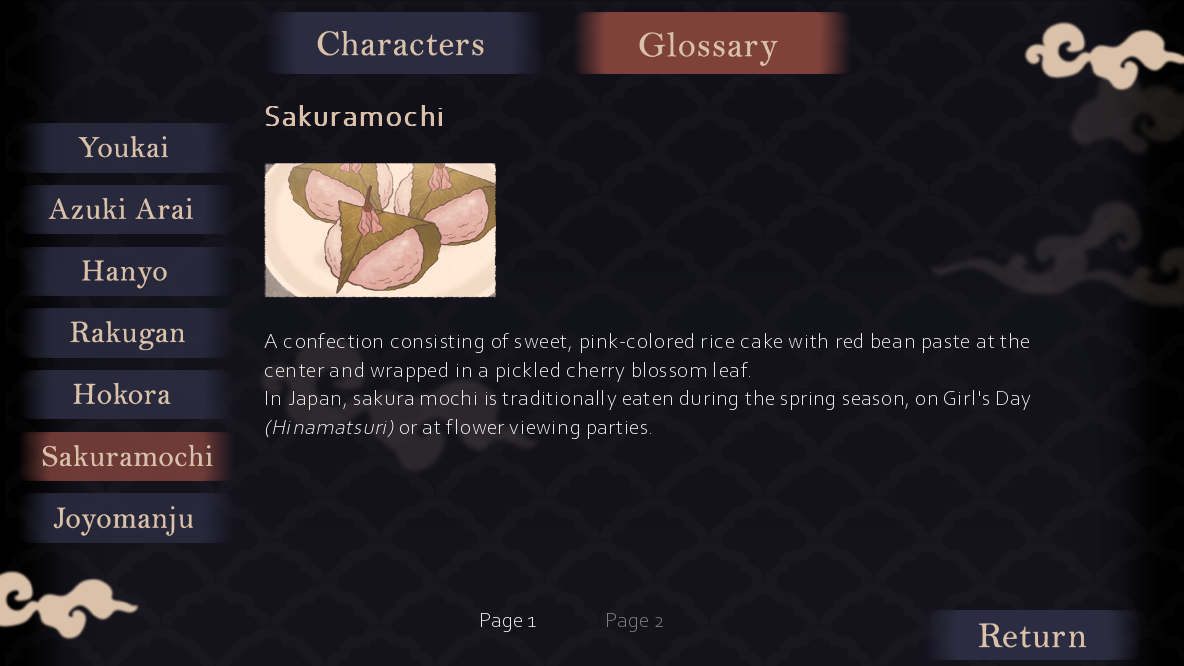 In addition to the glossary screen, we also tried to implement a tooltip that shows a short definition of certain terminology. The code is taken from this thread on LSF and modified as necessary. It is an old code that surprisingly works well, although we kind of hoped that it could also be linked to the glossary screen as well. Maybe we can figure it out if we have more time, but at the moment this function will suffice. 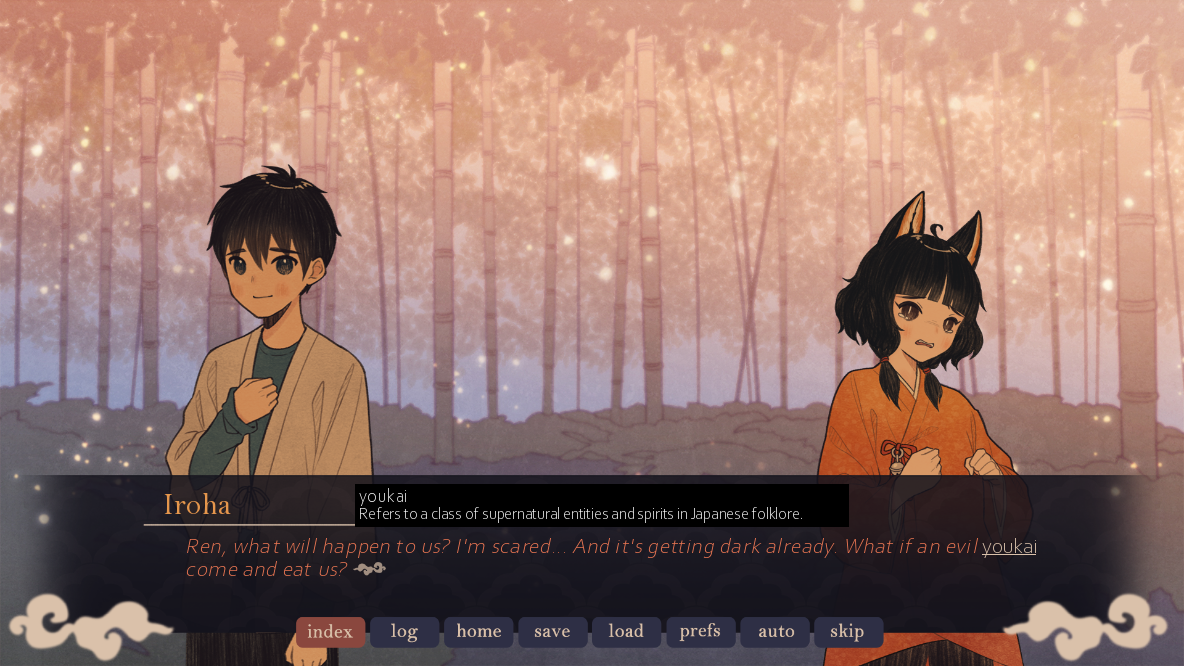 We learned a lot during this one month jam, and once again, Kohana is an attempt full of trial and errors on making a slightly more polished and effective visual novel than Mad Scientist’s predecessor works. We are sincerely grateful for the resources and for the nice people who helped us on the Ren'Py Discord server when we encountered technical problems.

We’re extremely lucky to have Jasson Prestiliano from JPSoundwork and Ford Audio Design to help us with the original soundtracks for Kohana. Working with them was a breeze and they handled their tasks professionally. We definitely recommend them if you’re looking for a composer. If we have the chance in the future, we’d love to have them again in the team.

As for the polishing phase, we only had a few days to polish Kohana, mostly making sure we don’t leave any more grammar mistakes and typos, and assign the correct expression, BGM, and sprite movement to the scene. However, since none of us are native English speakers, despite our editor’s best efforts, there are still many grammatical errors we missed. Just like EDDA Cafe, we’ll have an external proofreader to help us polish it more. An update will be released later.

As we’ve mentioned before, while we’d love to make an extended version of Kohana to flesh out the story more, our team members will be busy in the coming months so the plan was cancelled and Kohana’s development ends here.

Working on Kohana, we feel that we’re all growing up, both on our skill as game developers and in our knowledge on making visual novels. Kohana might not be as successful as EDDA Cafe statistically, but it’s still a precious experience for us and with 100+ entries in the jam, we managed to get rank 14th so it's still an achievement on its own. We’ll do our best so that our next game will be an even better product than Kohana and EDDA Cafe.

And last, we from Mushroomallow Studio wishing you a Happy Halloween! Please look forward to our next project in the future! 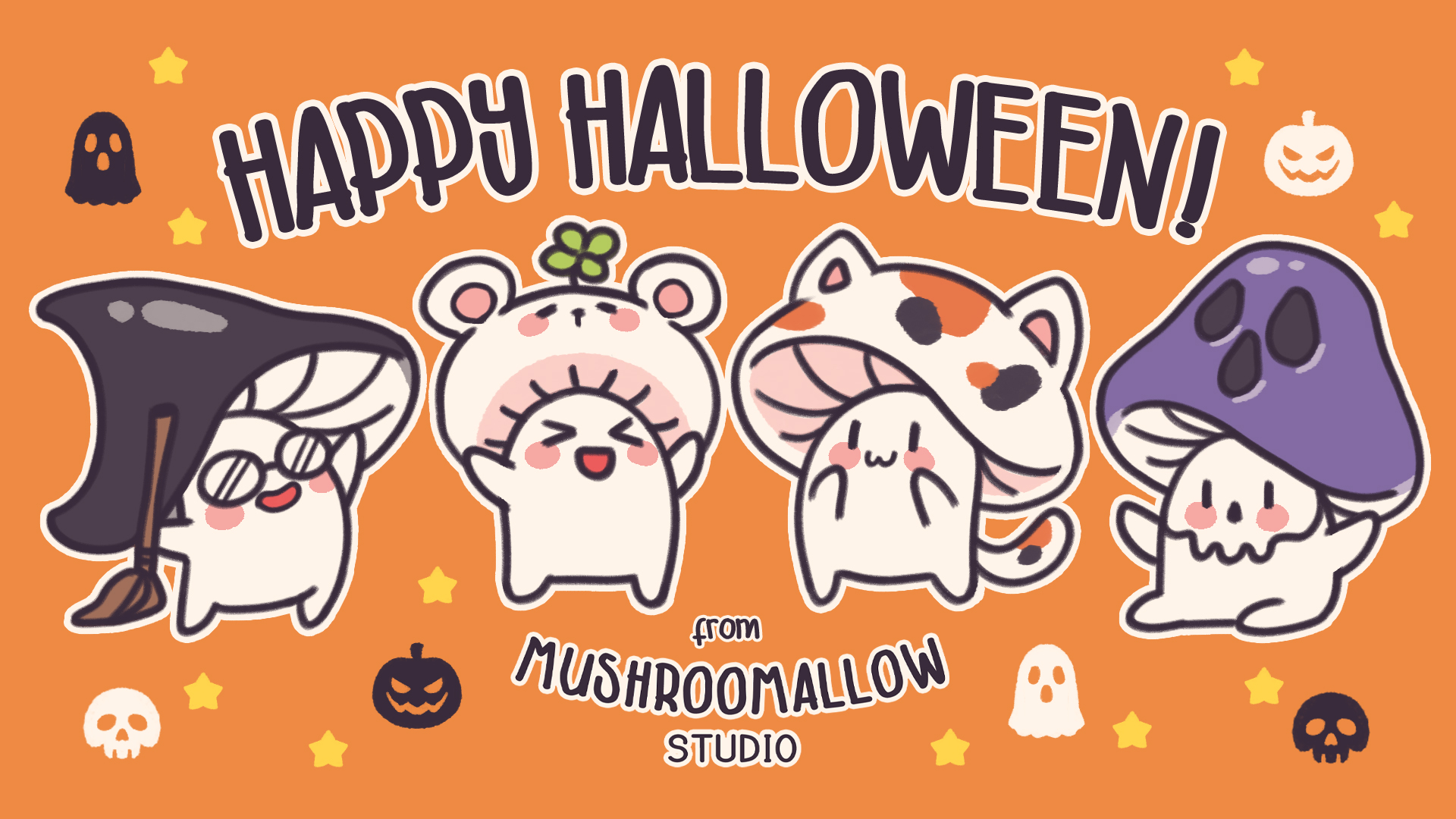 Once close, now far apart. What should be done to close the distance?

This was very fun to read, and provides insight to my project. Thank you so much!

Having no experience in modifying UI this was a delightful read. It gives me hope to someday tackle the Ren'Py screens! It's also wonderful to see how the game's colors and aesthetic is tied to a single image. I'm sad to hear that this game won't be continued, but I hope you'll continue making games with a similar mythologic touch!

You can do it! I am by no means a professional programmer too, but I learn by example and came to this point. That is why I want to share the resources for everyone (who wants to learn) in this postmortem too, we hope you find it useful

Thank you for such a detailed write up!! I'm always super interested in seeing other dev's processes.

You're welcome! We also enjoyed the process

Thank you for reading the postmortem of Kohana!